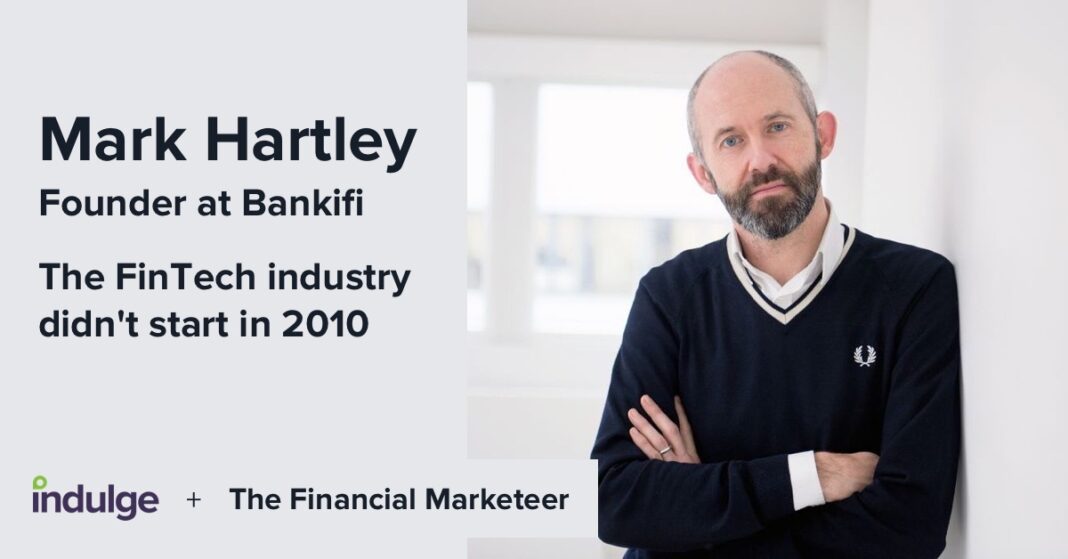 Listen to the podcast episode

An interview with Mark Harley, Founder & CEO at Bankifi

Mark Hartley has been working in the financial technology industry (not the FinTech industry, more on that later) since 1991.

“Those were the days when electronic banking became a thing, prior to the internet, so stuff was done over dialup modems and using DOS as opposed to anything that was visual and client-server or UX based.”

In the time that has passed since then, Mark has witnessed the emergence of digital technology and its impact on banking and business. It was along this journey that the roots of Bankifi began to grow.

“I couldn’t work out why there were two things, one for electronic banking that did your payments and let you look at your balances and then the accounting package, which did all of your stuff around your bookkeeping and your accounting, but it was all powered by the information that was held in a bank account.”

It’s in the context of this challenge that Mark outlines the core of what Bankifi is all about; “what we’ve effectively done is collapsed [the banking and accounting sides] into a single solution where you can do all of your banking and your accounting from a single interface that is offered through the bank’s mobile and internet banking channel.”

Mark has a lot to say about the term ‘FinTech’. “I would describe FinTech phase one [as] being parties that realise that the services that were being offered [by traditional institutions] were just not up to scratch. So phase one of FinTech was all about a better digital experience.

“I think we then saw FinTechs naively thinking that they could take over the world and just because they put a better digital experience out there, they thought that that would just become commonplace and banks would disappear.

“They forget that actually financial services is a massively, and rightly, heavily regulated industry and that it’s not quite as simple as putting a shiny app on the app store and everyone will come and use it.”

Mark and Bankifi decided to buck the ‘challenger’ trend, “we kind of took the view that banks have been around for 300 years, they spend an awful lot of money on IT, they’re not gonna let their customers go away without a fight. So we decided that we would help them give their small, to medium business customers, a much better experience than banks have been offering them up until now.”

The financial technology industry didn’t start in 2010 on the Shoreditch roundabout with a bunch of beardy hipsters just taking advantage of a change in regulation.

Clearly, Mark has taken the decision to become a partner to the big banks of the world, so I was interested to find out more about how a startup goes about building trust in such a well-established market.

“It’s all about building a credible team that has been there and done it before to be able to get over the hurdles of procurement, the layers of decision making, the bureaucracy, the red tape.”

Mark also speaks of an evolving banking industry that is open to new ways of doing things; “I would say it has changed a bit, a lot of banks now do have innovation arms, they do have ways of working with smaller companies.”

It doesn’t take long for our conversation to switch back to the topic of FinTech, a term I think it’s fair to say Mark doesn’t have much time for.

“The FinTech industry has told everybody for the last five years that the problem in small business banking or small business is access to loans, so you’ve seen a whole myriad [of firms] that have made their name in simplifying the lending process.

“Actually the problem is late payments. If you look at the late payments problem in the UK and actually globally, 80% of small businesses in the UK have invoicing terms of 30 days but on average, they don’t get paid for 74 days.

“If you look at those sole traders or micro businesses, they won’t have an admin department so they spend 1.2 days per month chasing people to pay them. That’s kind of an embarrassing thing when they’ve got a ring-up customer and say, ‘would you please mind settling that invoice for me?’”

It’s an observation that became the foundation of Bankifi’s work on behalf of TSB, one of the firm’s key clients.

As part of the work Bankifi has produced for TSB is a mechanism that enables small business customers of the bank to accept payments on the spot, without the need for waiting for an invoice to be settled. “What it’s basically doing is removing the need for small businesses to have a card machine.”

It’s easy to forget as a marketer that communication isn’t the only part of our job; distribution is also a key part of a successful marketing strategy. Bankifi is one of the best recent examples I’ve seen of this fact.

“It’s a fundamental part of the decision for us to go and distribute our product through banks and work with banks, as opposed to going directly to the end user.

Mark elaborates by explaining the challenge he’d face if he tried to target SMEs; “we talk about SMEs as if they’re this one amorphous mass. Actually, that couldn’t be more different. They’re actually very fragmented, there are lots of different verticals. So we took the decision to do the distribution through banks.”

“One of the biggest things we do is brief the analysts.”

Trade shows also feature, “one of them is the Swift conference. All the banks go and meet vendors and exhibitors. So that’s another traditional channel. Then the other [event] is the European Banking Association, they have something called EBA day.”

So, what really is Bankifi?

As is typical when I sit down with an expert is to ask them what advice they would offer to others.

“It’s become really fashionable to describe yourself as an entrepreneur or be in the FinTech industry.

“…if you’ve got £10,000 and you need to buy your first house, are you going to put your £10,000 into your business or are you gonna put it down for the deposit on your house? If you’re going to do the latter, don’t go into being an entrepreneur or a startup, because it will take every penny you’ve got, it will take every ounce of energy and passion and belief, and you’ll get told your idea is crazy.”

Mark is quite clear not to leave his message on a negative note, though; “having said all of that, if you’re prepared to do it and you prepare to go through the hard yards, then it’s very rewarding.”