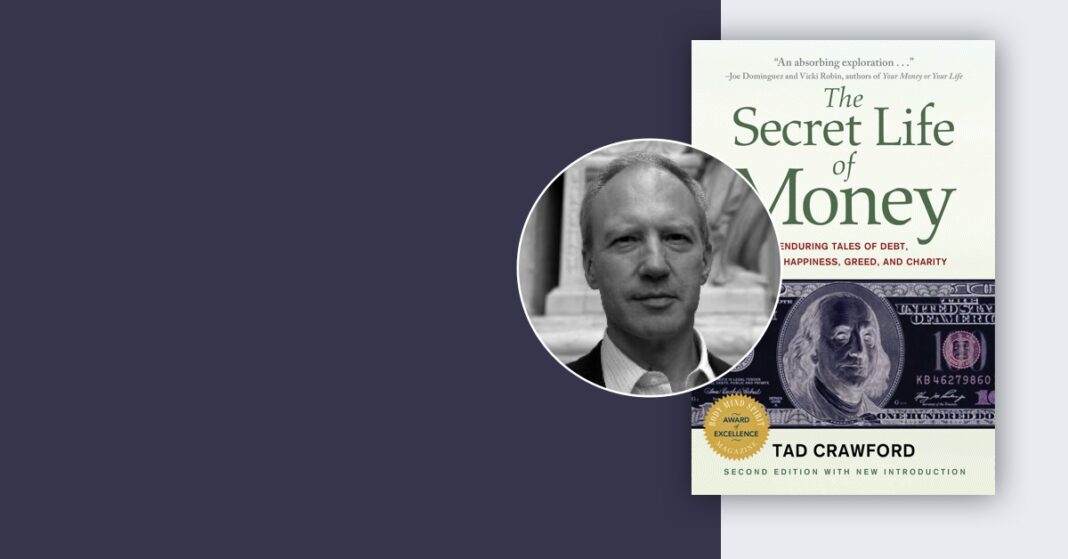 Listen to the full interview with Tad Crawford

The secret life of money

Money, as a concept, is something we take for granted. Some people have lots of it, some people have very little, but fundamentally, as a society, we accept money and the role it plays in our lives.

My latest guest on the podcast, Tad Crawford is the author of the book The Secret Life of Money, a book first published in 1995 but recently re-issued to cover what it calls the ‘Enduring Tales of Debt, Wealth, Happiness, Greed, and Charity‘.

“At that time [the book was first written] in the early nineties, I was starting a publishing company. So I found that I was spending a lot of time thinking about money,” Tad tells me.

“At some point, I started thinking, what am I thinking about when I think about money? That was the beginning of a lengthy exploration of what money means other than its usefulness as currency.”

The result is a book that uncovers the history of money and, crucially, attempts to unpick the true meaning of money and the concepts that perhaps have today been lost.

“People to live had to hunt and gather and then they wanted to ensure that they could continue to hunt and gather [so that] there would still be things that that would nourish them. So they offered prayers. That was the beginning of an exchange where you got something that nourished you and you gave prayers back for that.”

Before money, Tad explains to me, exchange existed as a way of people connecting with the world around them.

“If you go forward on many tens of thousands of years, you get to the Chinese creating actual money. The Chinese at one point used squares cut from the hide of white deer.

“They would manage the herds of deer to make sure that they wouldn’t have inflation [but] they managed the herds of deer so carefully that eventually the deer became extinct and it was kind of a triumph of money over nature.”

Tad also tells me the story of the community of the South Pacific island of Yap who used stone money.

“The stone money of Yap is this fascinating tale that the islanders would create huge, maybe eight to 12 feet in diameter stones that weighed several tonnes that had a hole in the middle and this money was created on an island 400 miles from the island of Yap.

“It was brought by boat across the ocean and the Islanders would have poles that they would shoulder the money on and carry it around the island. It was so heavy that when people exchanged it they wouldn’t necessarily take it somewhere else. They might just say, well, now this other person owns that money.”

Owning isn’t the same as possession

Tad continues to explain a particular example of an especially beautiful piece of the Yap stone currency that was lost at sea.

“[The boat that was carrying the money] ran into a storm and the currency went to the bottom of the Pacific. But generations later that family that had owned it was still wealthy because people believed in the value of what they possessed, even though it was on the ocean floor.”

It’s an incredible example of how the mere idea of value in an object is enough to possess power of the minds of the people who believed in its value, regardless of whether it was in reach or not.

Another story concerning Yap’s stone money involves the arrival of Germans to the island.

“When the Germans took over the island, they wanted the people to improve the kind of paths and make them more into roads. The Islanders really weren’t interested. So the Germans came up with an insidious idea.

“They sent a man around with a can of black paint and on each of the stones, he painted a small black cross and then they told the Islanders, the black cross meant that the stones were no longer money and had no value. At that point, the Islanders did what the Germans wanted and improved the pathways around the island. So you can see the power of mind over money and how important it is that we believe in giving value to things.”

Tad’s point when I asked him what makes money is that money, as an object and an idea can really be anything. It can have intrinsic value or it can represent value when enough people agree on that value.

“[Money] was also a way to enable people trading to go long distances and facilitate their activities. They didn’t have to carry huge amounts of goods to trade because they could take money instead.”

I asked Tad more about the idea of ascribing value to something that served no purpose in and of itself.

“Dogs were raised so that they could be killed and have their teeth used as money. So what’s the value of dogs’ teeth? The value is that it’s accepted. So that acceptance issue is so important.

“Salt (which has also served as money) of course is one of the things that nourishes us so it’s more like trading something that is itself immediately usable, but gold and silver aren’t immediately usable as something we can eat. They’re beautiful but the main factor is that we accept them as valuable.”

The circulation of money

Another interesting concept from Tad’s book is that part of what makes money useful and valuable is how it is circulated. In the book, Tad tells the story of a hoarder who buries a pile of gold in his garden.

One day the gold is stolen; the man’s unsympathetic neighbour makes a suggestion – bury stones in place of the missing gold. If the gold was never being used, it had no value.

Tad picks up, “there are so many stories such as Scrooge, he can earn money, but he can’t spend it. I think that one of the key things to understand about money is that it is made for circulation.

“That circulation is a way if it’s a healthy circulation, of nourishing the community. It’s a vision of it beyond the individual, but that vision comes from an individual self-exploration of what is the meaning of this process of gaining?”

The origins of debt

“As soon as people own things, the concept of debt presumably came with that ownership,” Tad explains as we begin to discuss the topic of debt.

“The issue with debt is that it’s presented as an easy way to kind of get things but the problem is that if you looked into the history of debt, even recently, like say in the 19th century, there were debtors prisons and debt is still [today something that can be] imprisoning. It’s a way in which you cut off the range of possibilities of what one can do.

“[Debt is] sort of like a prediction about the future. It says in the future, what comes out of me will be great enough that I can pay off this debt that I’m entering into. It’s like fire, it can be a wonderful benefit, but it can also be very dangerous. So we have to be very discriminating when we risk the ‘debtor’s prison’.”

Tad speaks critically of the concept of debt, so I ask him whether it’s all bad.

“For some people who are situated in places where they can make better use of money and earn from borrowing, then it makes perfect sense for them to borrow. But for people who are borrowing for consumption, it’s a much riskier proposition and that really has to be looked at closely.”

Our conversation turns to a marketing focus and particularly on how the tools of debt, namely credit cards are marketed.

“The main goal [of credit card advertising] is to emphasize the freedom that you’re given with the credit card. It enables you to do all sorts of things. But what it leaves out is the image of the debtor’s prison. It’s not a balanced view and you wouldn’t expect it to be, it’s really just advertising for something.”

I ask Tad about the current trend that is seeing consumers move away from physical money towards digital alternatives. It provides Tad with the opportunity to remind us about the origins of money again.

“We’re moving further and further away from the natural world where the exchange was an obvious one. I took the gifts of nature and I gave in return rituals and prayers for that.

“Now the thing that was enriching has become invisible and the digital movement of what is of value has become ubiquitous. So we’re faced with the kind of quandary which is, can we see in this digital world where the origins of the things of value that we want to move back and forth came from and respect that?

“It isn’t just that we’re abstractly sending money around, but that it does actually affect the physical world that we’re a part of, we’re not quite into the metaverse yet!”

Tad’s book also addresses the research that finds that we, as consumers, find it easier to part with digital money than physical tokens.

“That’s kind of worrisome, isn’t it. Now that we’re getting further and further away from money that goes hand to hand, where if you lived on the island of Yap from shoulder to shoulder. So if you don’t have a big stone that you might be reluctant to let go of, all I’ve got to do is go online and in a moment, the money moves. I don’t even see the money.”

How marketers should embrace the true meaning of money

“I think that there is an opportunity for marketers to use the educational approach and speak of money in a different way than people have before,” says Tad when I ask him what he’d like to see from finance firms in today’s society.

“I think the firms that indicated that they are aware of the issues of the ease of spending digital money and might suggest some precautionary steps, that might be a way for marketers to gain the trust of the people they’re reaching out to.”

As I documented at the start, money (the concept) is something we take for granted and think very little about. Exploring the concepts behind money can, as Tad suggests, connect us to the natural world again. That’s a very powerful message.

You can purchase Tad’s book, The Secret Life of Money: Enduring Tales of Debt, Wealth, Happiness, Greed, and Charity on Amazon now.